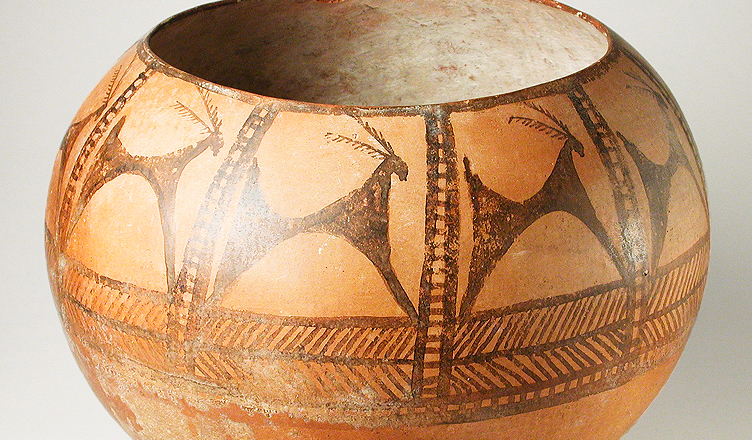 Mingei is the name of an art movement developed in the late 1920s in Japan by Yanagi Sōetsu (1889–1961), and as a term it refers to “peasant or folk arts” or “arts of the people”. The term was coined by Yanagi to refer to “hand-crafted art of ordinary people” and the beauty found in inexpensive, utilitarian objects created by nameless and unknown craftsmen, for the people by the people.

The term can be better understood when considering the earlier Arts and Crafts movement, created about 1880 in England, which focused on the aesthetic value of utilitarian objects. The movement stood for traditional craftsmanship using heritage styles and decoration patterns, against the impersonal, mechanized direction of society during the Industrial Revolution and the relatively low status of decorative arts.

Both movements underscore that craft products have a dual substance. They are usable items, yet at the same time they include heritage that represents a region and its people. This heritage does not reside only in the object as a unique, tangible work of art. Most importantly, it resides in the skills and knowledge that is necessary for its making and the traditions embedded in it.

In contrast to the preservation and study of unique, tangible works of art where individual creation and innovation has the first role, Mingei reminds us of the intangible heritage of collective creation by anonymous craftspeople within the tradition and social context is preserved.

The Mingei H2020 EU project advances digitisation of Cultural Heritage, by providing a two-fold means towards the digitisation of both tangible and intangible aspects of a craft heritage. On the one hand, the artefacts, tools, and materials of a craft, as well as, the motion of craftspeople during craft practice are digitised. On the other hand, Mingei semantically encodes and preserves knowledge on craft communities through historical and ethnographical tools.

Written by Xenophon Zabulis, FORTH

Etymology of the Mingei term

The name “Mingei” combines min (民), meaning the common people, and gei (芸 or 藝, the same character used in geisha), meaning art. It is also an abbreviation for minshuteki kōgei (民衆的工芸), which literally translates to popular industrial arts. Essentially, Mingei refers to the art of the common people. In 1916, Yanagi made his first trip to Korea out of a curiosity for Korean crafts. The trip led to the establishment of the Korean Folk Crafts Museum in 1924, and the coining of the term mingei by Yanagi, potters Hamada Shōji (1894–1978) and Kawai Kanjirō (1890–1966). In 1926, the Folk Art Movement was formally declared by Yanagi Sōetsu. The philosophical pillar of mingei is “hand-crafted art of ordinary people” (民衆的な工芸 (minshū-teki-na kōgei)). Yanagi’s book The Unknown Craftsman has become an influential work since its first release in English in 1972. Yanagi’s book examines the Japanese way of viewing and appreciating art and beauty in everyday crafts, including ceramics, lacquer, textiles, and woodwork. A similar process of industrialization was occurring in Europe at this time, leading to the Arts and Crafts Movement in England, meant to preserve traditions of handmade functional objects. Sōetsu Yanagi synthesized these ideas with Buddhist principles of simplicity to form the Mingei Movement, which was announced in 1926.

“It is my belief that while the high level of culture of any country can be found in its fine arts, it is also vital that we should be able to examine and enjoy the proofs of the culture of the great mass of the people, which we call folk art. The former are made by a few for a few, but the latter, made by the many for many, are a truer test. The quality of the life of the people of that country as a whole can best be judged by the folkcrafts.”