Mingei will explore the possibilities of digitising and making accessible both tangible and intangible aspects of craft as heritage. Heritage Crafts[1] (HCs), meaning crafts that are of Cultural Heritage (CH) significance, involve craft tangible artefacts and products, traditional materials and tools, while encompass craftsmanship as a form of Intangible Cultural Heritage (ICH)[2]. Intangible HC dimensions include knowledge about materials, dexterity, know-how, and skilled use of tools, as well as, tradition, structure, and a common sense of identity of the communities in which they are, or were, practiced. HCs are part of the history and economic life of the areas and communities in which they flourished. Their nature, diversity, excellence and significance vary over time and they are part of the CH and history of local societies, nations, and continents. HCs are object of cultural exchange or may be secret and can be decisive to the economic or military dominance of a nation.

The technical, historical, and social knowledge about a HC, its temporal evolution over time, and the way that it is taught are parts of humanity’s Cultural Heritage. The significance and urgency to the preservation of HCs is underscored by UNESCO[3], as “several are threatened with extinction, due to the declining numbers of practitioners and apprentices”, in combination with demotivation, lack of interest in younger generations and urbanization.

Craftsmanship has been important in Europe’s history as whole, i.e. the development of the 19th century applied and industrials arts led to 20th century design, and at the same time, were affected by historical eras, such as the Industrial Revolution. The study of HCs can provide essential knowledge in historical, societal and economic topics, and the significance of HCs can only be understood against these contexts, which have a strong interdisciplinary and cross-border nature. HCs hold strong potential for Europe’s Cultural Heritage Institutions (CHIs) and Creative and Cultural Industries (CCIs), which play an significant role in the EU economy, tourism, rural regeneration and competitiveness, while provide a fruitful terrain for intergenerational and life-long learning.

Despite the cultural significance, the need for preservation, the extensiveness of HC related tourism, the current European revival of crafts[4], and the pressing educational needs, efforts for HC representation and preservation are scattered geographically and thematically. Challenges also include the wide span of HCs in tangible and intangible dimensions, as well as, their multiple, temporal, societal, economic, and geographical contexts.

Mingei will provide means to establish representations of HCs based on digital assets and semantic annotations, in a way that captures and preserves both tangible and intangible CH dimensions.  Meaningful and documented experiential presentations of HC will be achieved through narratives. These presentations will address a range of uses including, personalized storytelling, interactive Augmented Reality (AR) and Mixed Reality (MR), and through the Internet. Engaging cultural experiences have a direct impact in interest growth and tourism, which can support HC communities and institutions. A secondary impact is the attraction of new apprentices to guarantee long-term HC preservation and its economy. The consortium brings together targeted and complementary expertise and content:

[3] UNESCO, Text of the Convention for the Safeguarding of the Intangible Cultural Heritage, 2003. 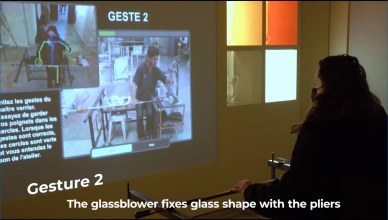 On March 10, Waag collaborated with several partners to [...]

How can we use technology to digitally preserve [...]