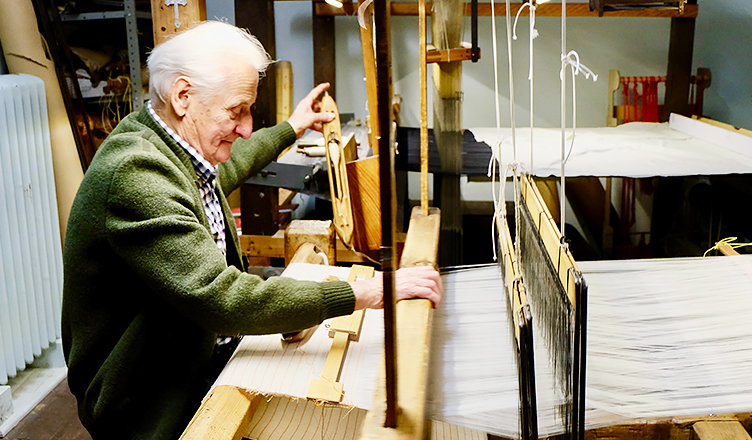 As a way to represent and preserve Heritage Crafts in the context of Mingei, Virtual Humans are used to reenact and recreate the crafts in Virtual Environments. The Virtual Humans are created using either face scanning or third-party software. We explained this process in our previous article about the creation of virtual avatars.

Our next step is to utilize these Virtual Humans to reenact the crafts that have been digitised by other partners in Mingei. We have started with the pilot on loom weaving, conducted at Haus der Seidenkultur in Krefeld.

According to Mingei’s approach, we conduct a conceptual decomposition to get an overview of all elements that make up the craft of loom weaving. This includes both the machine used into its functional parts, and the motion that takes place during the craft execution into its basic steps. This decomposition of the craft in separate steps is made possible by the Mingei ontology and the process schemes of crafts, which is explained in detail in this article by CNR.

The machine and its parts utilized in each craft have been digitized with 3D reconstruction by FORTH, and the movement of the crafters has been captured by Armines. The results of these processes have been combined to create the virtual reenactment. We provide a generic approach and this segmentation can be applied to any craft.

For the case of loom weaving, and according to our approach, the weaving process is decomposed into 3 actions. The first step is shedding, when warp threads are separated to form a shed. The second step is picking. Weft is passed across the shed using the shuttle. The third and final step is beating. Weft is pushed against the fabric using the beater. Thus, the decomposed loom interface components are the shuttle, treadle and beater. The whole process can be visualized as in the diagram below. 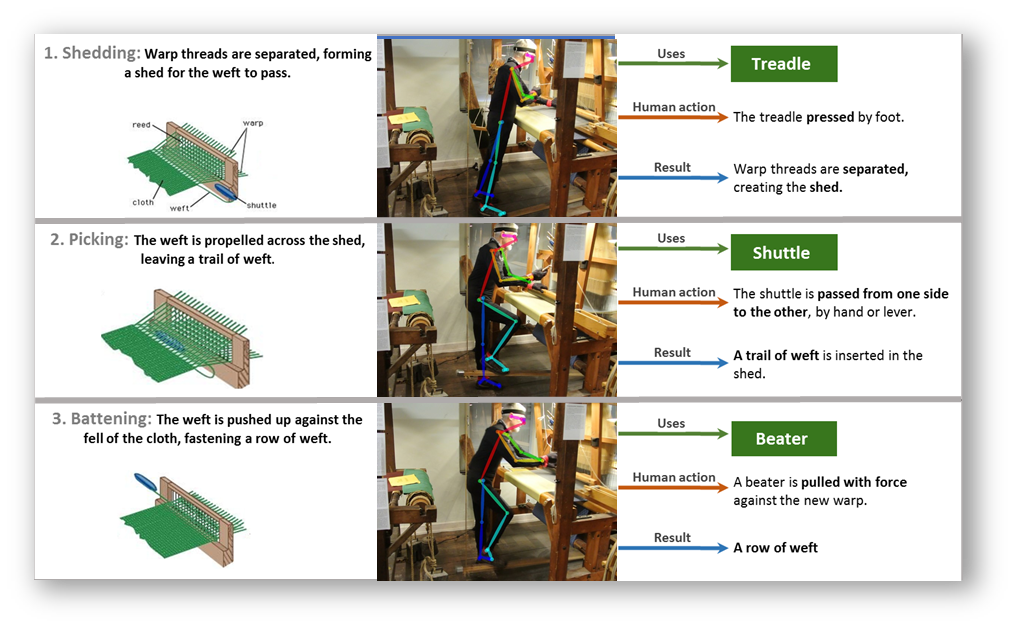 From diagram to reenactment

The movement of the machine parts is thus the result of the motion of the human. First, we defined the body parts that utilize and move each machine part. Then we defined appropriate grip postures, orientations and attachment points. And finally, we created appropriate mathematical formulas that describe the movement of the machine part, according to the motion of the human. The result can be seen below. where a Virtual Human is operating the treadle of the loom machine.

This reenactment aims to contribute to the representation efforts of the craft, and help in its promotion and dissemination. For the time being, we have implemented this methodology successfully for the treadle (pedal) of the loom. Future work will include achieving this for the beater and shuttle.