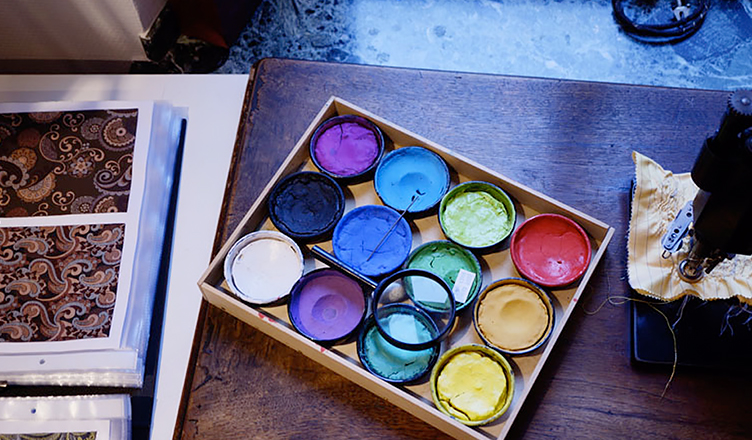 Pattern design once was a well-respected vocation within the textile sector. The pattern designer or ‘dessinateur’ was the first craftsman involved in the production of splendid silk fabrics for, amongst other things, liturgical vestments. How did one become a pattern designer? And why has this once established vocation turned into oblivion?

The road towards pattern design

In the mid-19th century, the silk industry in and around Krefeld was made up of around 90 companies which required an increasing number of different skilled craftsmen. Therefore, both industry and small trades called for the establishment of a textile college, where the subjects appropriate to the production and processing of fabric, in particular silk, would be taught. As a result, the “Crefeld Höheren Webschule” (Krefeld Textile College) was set up in 1855. This was the only vocational college focussing on silk production in Germany and it soon gained a very good reputation. It was associated with a valuable textile collection right from the time it was established. Both the historical and the contemporary sample collections provided the basic requirements for design work and were a source of inspiration in particular for pattern designers.

This college, which was re-named “Textilingenieurschule” (Textile Engineering College) after the Second World War, provided the ideal opportunity for young men and women in Krefeld to learn an interesting and respected vocation, particularly if they had artistic talent and dexterity. This was indeed so in the case of Dieter Blatt and Günter Göbels, now active volunteers at Haus der Seidenkultur (HdS). As youngsters, both of them enjoyed drawing, were creative and were encouraged by their families to undertake the appropriate vocational training.[2] Today – over 50 years later – they are still happy to demonstrate their skills to visitors at Haus der Seidenkultur.

For the three important crafts required for Jacquard weaving, the basic curriculum took 3 years to complete and was very varied. The theoretical part alone included weave theory, material science, point paper design as well as life drawing, morphology and chromatics, composition and pattern design. The two HdS volunteers also explained that free-hand drawing, which was essential for design, was taught and practised during evening classes.

Having completed the basic training, the apprentices could choose one of the three specific crafts, namely pattern design, point paper design or Jacquard card punching. At the time in the mid-20th century, there was a clear differentiation between the three crafts. Once the apprentices had completed their training, some of them went on to work in independent technical workshops comprising 3 to 30 experts which served small silk production companies including weaving workshops for ecclesiastical textiles, whilst others were employed in technical workshops at the large textile factories in Krefeld and the surrounding area.

From established crafter to computer expert

The vocation of pattern designer was officially recognised on 4th November 1949. However, as a result of the increasing mechanisation and the re-structuring of vocational training in the textile sector, the vocation designation was abolished again on 1st August 1978. Nowadays the tasks of the pattern designer and point paper designer are all carried out by computer by one single expert, referred to as a “Textile Pattern and Product Designer”.

Pattern design was one of the most respected crafts in this sector. The pattern designer definitely needed to be creative and before starting on the design he had to carefully take into account many different aspects of the fabric to be produced – quality, final use, colour composition, pattern size and repeat.

Not only had he to consider historical patterns, former and modern art trends (e.g. Bauhaus), customer specifications but also to create his own abstract designs. He was responsible for determining the optical appearance of the fabric, had to be aware of the effect the choice of weave would have and take into account the chromaticity of the finished fabric. The number of colours used in the design depended to a large extent on the final product. For a print design, there was virtually no limit to the number of colours which could be used, but for a woven pattern the number of colours was determined by the actual production conditions. In the course of the 20th century, more and more synthetic colours and fabrics were introduced which needed to be handled differently to natural colours and fabrics.

In the case of Jacquard weaving, the pattern repeat is determined by the size of the loom harness. The maximum repeat width which the pattern designer has to take into account depends on the warp thread density per centimetre and the harness repeat.

Having considered all the above, the pattern designer went to work sketching the pattern as a picture which he then coloured according to the requirements of the finished fabric using brushes, paint and coloured crayons. For damask tablecloths which are white-in-white, the pattern design was produced in various tones of grey. The pattern designer also determined the weave to be used, as this gave the design its final character. Then he handed it over to the point paper designer for the next stage in the preparation prior to weaving.