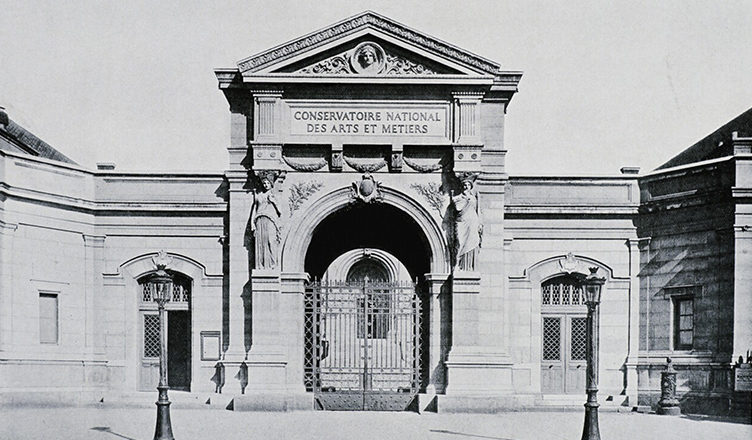 The Conservatoire National des Arts et Métiers (le Cnam) in Paris is established in 1794 by the National Convention during the revolutionary era. The goal of this revolutionary institution is to teach by the means of a collection of artefacts and machinery, to spread innovative ideas through a public of craftsmen, industrialists, and workers.

Building upon ages of knowledge, skill and expertise, this is where the Mingei pilot on glass blowing takes place. What is the history of glass manufacturing at the Conservatoire? And what is the value of the Musée des Arts et Métiers, still showcasing objects relating to glass craft today? Let’s explore the history of the museum and its links with teaching and research through the personalities of various professors in the first half of the 19th Century.

At the founding of the Conservatoire by Henri Grégoire in 1794, glass technology was not yet part of the curriculum. Chemistry was one of the three chairs established in 1819, yet glass technology had a limited place in the lessons of Nicolas Clement-Desormes (1778-1841), the first appointed professor. The library of the Conservatoire keeps an important manuscript journal recording the chemistry lessons from 1825-1826, which shows that only two lessons were devoted to glass manufacturing. Clément-Désormes insisted much more on the economical side, especially the cost of qualified labour, rather than on technological processes. There is no clue of any objects or collections being shown. The 1818 catalogue of the ‘Royal Museum of Arts et Métiers’ lists no glass objects or models relating to the technology.

After the death of Clément-Désormes in 1841, the next professor appointed was his assistant Eugène Péligot (1811-1890). Péligot would have a long career at the Conservatoire from 1841 till 1889 and various other occupations, both researching and teaching.

Péligot had been one of the many students of Jean-Baptiste Dumas (1800-1884), a prominent chemist and a powerful member of the scientific cream of his period. Among the numerous scientific papers written by Eugène Péligot are two books on glass manufacturing. The first is a published version of his lessons on glass at the Conservatoire, selected from the general program of his chair: Douze leçons sur l’art de la verrerie (1862). The second book is a revised and enriched version: Le verre, son histoire, sa fabrication (1877).

Péligot was also member of the jury of the London Universal Exhibition of 1862 and of the Paris Universal exhibition of 1867. Therefore, it is not a surprise that a number of glass pieces were acquired at the professors’ request for the collection of the museum. Among the first objects relating to glassmaking is a large selection from the Choisy-le-Roy glass factory. It comprises more than fifty tools, pots, molds, fabrication steps and finished pieces, among which stands the glass carafe that is being reproduced as part of the Mingei project. This glass carafe is made by Georges Bontemps (1799-1883), who was the director of the Choisy-le-Roy glass factory. He was certainly interested in the lessons at the Conservatoire and the prospect of technical education it gave to his workers.

In 1845, Eugène Péligot was sent to Austria on behalf on the Parisian chamber of commerce to review the exhibition of national products in Vienna, and to visit different factories. His report was mostly devoted to Bohemian colored glass, fashionable and very superior to the French similar products of the time. But he also recorded seeing French products being copied in the Bohemian workshops, alleging the fierce international competition on glassware. Forty pieces of Bohemian glass are noted in the inventory of the museum for that same year 1845, and it is tempting to think that they were probably brought back by Péligot. Thirty-one are still remaining today in the collection of the Musée des Arts et Métiers.

A small note in the inventory indicates that some pieces were broken during the lesson of chemistry applied to the arts. This confirms the effective use of artefacts and the improper handling of some of them. Because there is no mention of a gallery for the glass collection at the time, the pieces seemed to have been stored in the professor’ cabinet or in his laboratory premises.

In 1848, a special chair for ceramics and glass was opened. Jacques Ebelmen (1814-1852), a chemist and mining engineer, was chosen. He taught between 1848 and his premature death in 1852, but his main function was administrator of the Sèvres Manufacture, the renowned national porcelain manufacturer. He was also keen to acquire pieces for pedagogical use and even organized a transfer between the Sèvres museum (part of Manufacture) and the Conservatoire.

The revolution in 1848 brought down the Louis-Philippe regime of France, which caused changes in the Conservatoire. Jean-Baptiste Dumas was briefly Minister of Commerce and Agriculture in Louis Napoléon Bonaparte’s government. With the aim of renovating technical higher education, he chose the new administrator of the Conservatoire: Arthur Morin. Morin shared his views and was also close to the future Emperor, Napoleon III.

Under Morin’s guidance, administrative practices were renewed and new qualified staff was brought in for the administration and the library. Morin also turned his attention to the galleries, to set up an industrial museum in place of the old exhibition. A precise inventory of all collections assembled since the creation of the Conservatoire was issued and the private use of collections in the cabinet was forbidden.

The inventory was the basis for the publication of a new catalogue of collection, systematically and thematically set up, each professor being in charge of the relevant sections. Glass collections were described in the section O, listing a total of 316 items, with sometimes a large collection of artefacts assembled under a single item number. The catalogue is available online.

Towards a new chair

When Jacques Ebelmen died prematurely in 1852, his successor at the Manufacture, Henri Regnault, refused to be appointed at the Conservatoire. As such, Eugène Péligot started his glassmaking lessons again in the program of applied chemistry.

However successful Peligot’s lessons were, the Chamber of Commerce insisted on the re-creation of a specific chair devoted to ceramics and glass, probably under the pressure of local manufacturers who were numerous in the Parisian neighborhood.

In 1868, the chemist Victor de Luynes (1828-1904) was appointed to hold both the glass and ceramics chair and the dyes and printing chair. He chose to alternate from one year to another on these two very different subjects. Under his guidance, until 1905, a new era for research and collection started.

The collections assembled or catalogued by the professors in the first half of the 19th century have a lot to tell about the interests of the manufacturers and the taste of an era, as they were strongly engaged in the scientific and economic societies of their time.

The Conservatoire was able to shine in many directions despite the fact that it didn’t deliver diplomas until the next century. Through its role in education and innovation, as a laboratory, as a learned society of professors with links with the scientific and industrial world, it made an impact.

The galleries of the industrial museum should rightly be considered as an instrument in the design set for the Conservatoire in 1794, by its founder Henri Grégoire: “(to) enlighten ignorance that knows not and poverty that has no means of acquiring knowledge”.

Carré, Anne-Laure. 2015. “A collection for Education. The Glass Collection of the Musée du Conservatoire des arts et métiers during the XIXth Century”, RHA.