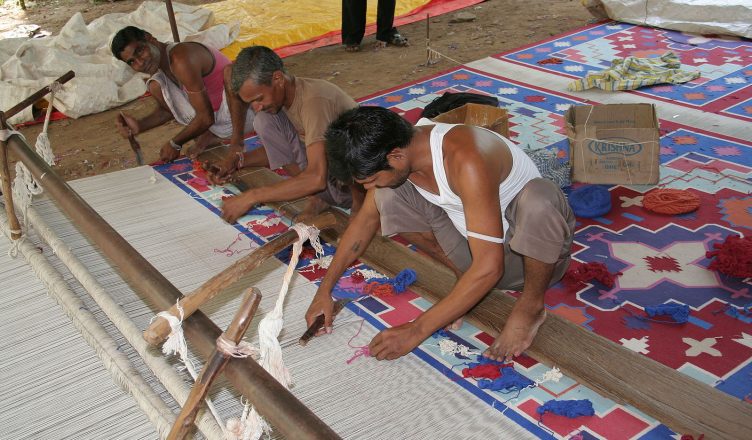 Safeguarding heritage craft through the use of digital tools is at the heart of the Mingei project. Heritage craft communities throughout Europe are struggling to keep their craft alive and to pass on the (embodied) knowledge, skills and traditions to the next generations. But these challenges are not faced by European communities alone. Across the globe, heritage crafts are under threat. We spoke with Sumit Dang, director of Meraki Signature Private Limited, who is based in New Delhi. He told us about the way the craft of handweaving is under threat in India. But he also provided a hopeful story about its revival thanks to young entrepreneurs who aim to bring this local Indian heritage to a global stage. We discovered many similarities between European and Indian practice, but also some interesting differences.

The threat of urbanisation
We started off our conversation talking about the threats facing traditional weaving communities in India and it turned out some of these threats are very similar to those faced by communities in Europe. Weaving traditions are rooted in rural communities, where practitioners combine weaving with other sources of income, mostly agriculture, and caring for their (extended) families. Younger generations growing up in these communities prefer to move to urban environments and find other ways to sustain themselves. This results in an aging craft community and lack of interest from younger generations who prefer an urban living environment. This is a challenge that many rural craft communities in Europe also face.

A response to these challenges we often see in Europe is what we could call a heritagisation of the craft practice. Elderly practitioners (often retired) practice the craft, often in the context of a museum or heritage site. It is not uncommon that these practitioners work on a voluntary basis, although the result of the craft might be sold to tourists, or visitors. The proceeds are often used to maintain the site or craft tools. It is not uncommon for this to result in craftspeople mainly (or solely) producing small, affordable items. Things that people would buy as a souvenir. But the question remains: Who will take over from the current practitioners? Learning the craft asks a tremendous time investment, as does demonstrating the craft on site.

The opportunity of globalisation
Heritagisation of traditional crafts rarely happens in rural India. Sumit Dang explained to us this was due to a combination of a lack of resources and infrastructure, and other socio-economic barriers. In stead, people and organisations outside the community help maintain weaving traditions by seeing the commercial value of the end product. The internet and global trade networks have opened up an international market for these products created in rural India. Dang has been involved with various of these ventures and explains how commercial success can lead to mutual gain. Firstly, we acknowledge that with this approach it is not the community itself, but a relative outsider who decides which weaving traditions will be safeguarded. These will be the traditions for which commercial success is expected: high quality and unique products that suit modern tastes. However, this does not mean that the heritage craft community has no agency.

Dang described how attempts to move weavers to a factory-type setting to better control their productivity have mostly failed. Weavers need to combine caring for their livestock, crops and sometimes also family members with their weaving practice. It is therefore crucial for them to weave in their own homes and at their own pace, depending on the season and other responsibilities. Weavers continue to create the products they have always made: rugs and fabrics. Although designers might collaborate with them to create new designs, the skills and techniques of the weaver are leading in this collaboration. Skills are learned from a young age in a family setting, although strict child-labour laws challenge this practice.

The importance of storytelling
Weavers do not produce small, cheap souvenirs, but large rugs and fabrics that they must sell for a fair price in order to maintain themselves and their families. The plus side to this is that younger generations see a clear value in maintaining the craft: it can be a fairly reliable source of income, while they can maintain a level of independence that factory work does not provide. The challenge then is to find buyers. Alongside investors, designers and craftspeople, Dang advocates for the importance of storytellers. Because of the internet and the opportunities brought by online storytelling, the woven products can be marketed to a a new, global market. International customers are willing to pay a fair price for a product that has an engaging story about its provenance, the skill of the craftspeople, the communities of origin and the unique qualities of the rugs and other woven materials.

In a European context, commercialisation of craft is often frowned upon. It is associated with exploitation or ‘watering down’ the original craft qualities. However, the story coming from India shows that it is possible to create sustainable collaboration where craftspeople maintain their agency and are equal partners in a joint effort to keep their craft commercially viable. What’s more, one could argue that through these stories, knowledge is shared not only of the material, but also the immaterial aspects of the heritage craft. 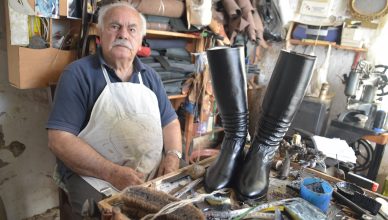 In the Spotlight: Nikolaos Fasoulas, a traditional shoemaker from the mountainous village Anogeia

The team of Mingei project visited the [...]

In the Spotlight: Women weavers from “Aretousa” Workshop