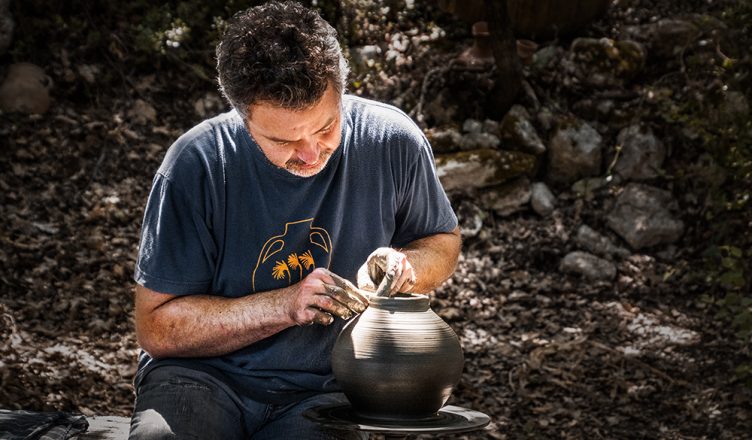 Pottery is one of the oldest human inventions, originating before the Neolithic period, practiced by elemental materials and processes: Earth, water, and fire. The pots are hand made on the potter’s wheel and fired either in an electric or a wood kiln. Pottery objects are made — as it has always been — to be filled with water, to offer wine, to store olives, fruits, honey, goods or flowers. They also beautify the surroundings with their purity of their materials and the simplicity of their form.

To better understand traditional, participatory crafts and their transition into the modern age, we visited the pottery workshop Keramion. Keramion (Κεραμεῖον) is a modern pottery workshop situated in Margarites (Crete, Greece) which presents handmade utilitarian and decorative pottery, inspired from the Neolithic period and fitting the modern age aesthetics and practical requirements. Keramion operates under the supervision of potter Giorgis Dalambelas and Mariniki Mania and is a partner of Psiloritis UNESCO Global Geopark.

At Margarites, pottery tradition dates from the Neolithic period and is highly-relevant to the ample reserve of clay found at its rural surroundings at the mountain of Psiloritis. Pottery is made of domestic soil and schist, a kind of soil of very high granularity and concentration in argyle that is extracted from Psiloritis Mountain. Next, following an ancient technique, the pottery is decorated with “plokos”, a piece of sheep’s wool made of sheep hair and colors made from natural dyestuff. In the past, all pottery from Margarites was decorated with plokos-drawn flowerings as a certification of their origin.

The process of traditional pottery

Pottery items are made of domestic soil and schist, which is a kind of soil of very high granularity and concentration in argyle that is extracted from the Psiloritis Mountain. In this video we witness the collection of the material.

2. Kneading: from soil to clay

Before being shaped, soil is kneaded into lumps of clay to ensure an even moisture content throughout, and to remove air and lamination. This is accomplished manually by wedging, which is a procedure for preparing clay by hand at which a lump of clay is repeatedly thrown down on a workbench. The purpose is to disperse water uniformly, to remove lamination and to remove air.

The next step is to shape the clay into pottery on the potter’s wheel. A ball of clay is placed on the wheel which rotates on foot power or an electric motor. During the process, the wheel rotates while the solid ball of soft clay is being pressed, squeezed and pulled gently upwards and outwards into a hollow shape.
The first step is called centring and involves pressing the lump of clay downward and inward into rotational symmetry. The next steps are opening (making a centred hollow into the solid ball of clay), flooring (making the flat or rounded bottom inside the pot), throwing (drawing up and shaping the walls to an even thickness), and trimming (removing excess clay to refine the shape or to create a foot). Objects can be further modified by the attachment of handles, lids, feet and spouts.

4. Burnishing and decoration of clay bodies

Burnishing is a form of pottery treatment in which the surface of the pot is polished, using a hard smooth surface such as a piece of wood, a bone, or a smooth pebble, before firing. They often use a small pebble called “drakonaki”. As a result, the surface becomes very shiny.
Following an ancient technique, pottery is decorated with “plokos”, a piece of sheep’s wool made of sheep hair and colors made from natural dye. In the past, all pottery from Margarites was decorated with plokos-drawn flowerings as a certification of their origin.

5. Firing ceramics in a wood kiln

Firing ceramics in a wood kiln produces irreversible changes in the clay body and its purpose is to permanently harden the clay. It is only after firing that an object becomes pottery. Earthenwares are normally fired at temperatures in the range of 1,000°C (1,830 °F) to 1,200 °C (2,190 °F).

6. Removing the pottery from the kiln

After firing, the pottery is carefully removed from the kiln. Wood kilns produce smoke, soot and ash. In the past, kilns were located outside the village. Often many families share the same kiln to fire their pottery collectively.

At Keramion, Pottery seminars are held for international students and visitors, disseminating the art and craft of pottery to the public. Visitors are able to view and participate in demonstration of traditional pottery. Educational programs present pottery, from the raw earth materials to the making of fine pottery, to schools and adult groups. Visitors are presented with the stages of soil collection, clay production, shaping pottery on the wheel, burnishing with pebbles, and firing pottery in the wood kiln.

Keramion curates and presents educational programs in schools of all levels, students and adult groups from Greece and abroad.
Keramion also collaborates with schools, universities and institutions such as: University of Crete, British School at Athens (BCA), Institute for Aegean Prehistory Study Center for East Crete (INSTAP-SCEC), College Year in Athens (CYA), Centre for the Study of Traditional Pottery, Museum of Ancient Eleftherna (MaE), etc. 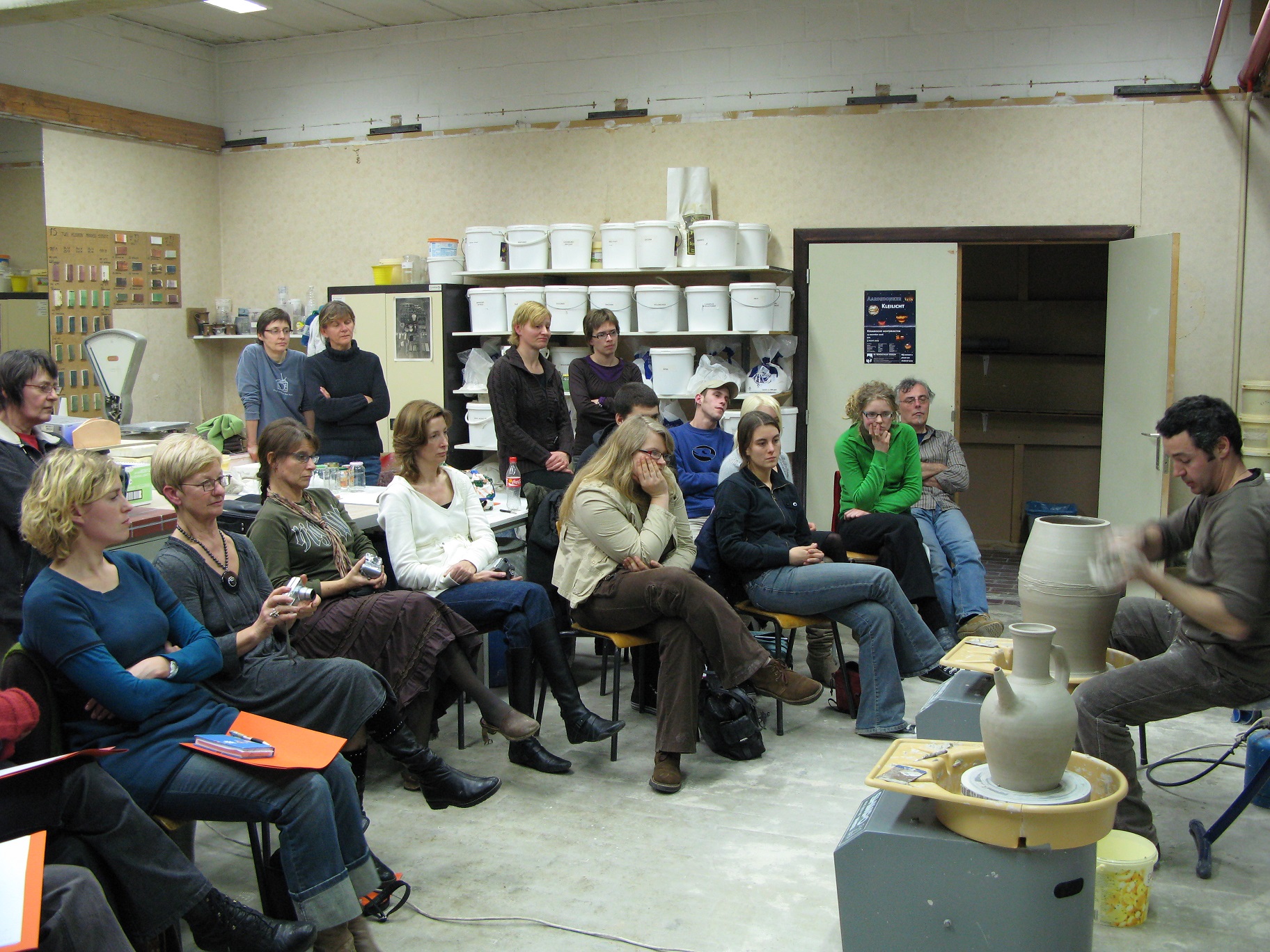 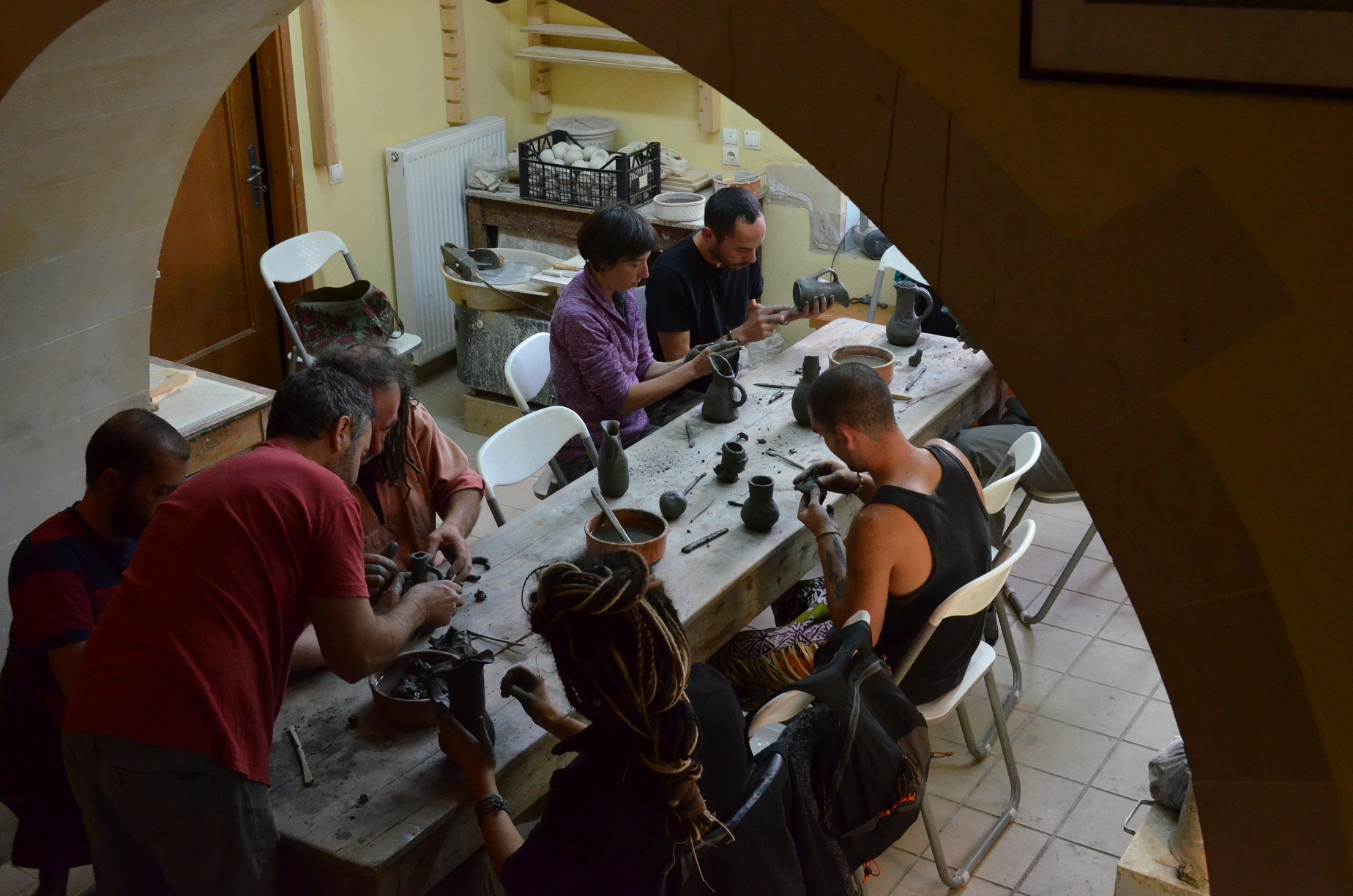 The value of crafts preservation

Our trip to Keramion has enabled us to better understand how to provide relevant educational content and engaging experience for uses prior, during, and after a cultural tourism visit. The purpose of our visit to Keramion was to explore ways to support thematic and cultural tourism with heritage craft themes in order to contribute to the preservation of these forms of cultural heritage. The importance of preservation and continuation of the practices of heritage crafts can be motivated by the benefits of thematic tourism. Craft workshops and pertinent thematic tourism can provide participatory experiences and access to local culture. Crafts flourish in multiple, distributed rural areas, and craft workshops can therefore alleviate visitor load from mass tourism destinations. The promising possibilities of thematic tourism emphasise the importance of the preservation and representation of heritage crafts.

Nearby Locations of Interest

The village of Margarites is one of the largest pottery centres in Greece. The old and new techniques coexist in harmony in all 20 of the pottery workshops and showrooms of the village, where traditional and modern pottery is produced. The village visitors can admire the traditional architecture, old churches, the Monastery of Christ the Savior, the Late Minoan vaulted tomb of 1350 BC and route E4, leading to ancient Eleutherna.

Keramion is a partner of the Psiloritis UNESCO Global Geopark. Psiloritis UNESCO Global Geopark is located on the island of Crete, Greece, extending over an area of about 1200 square km. It covers the central part of the island including the entire area of Mountain Idi (Psiloritis) which is the highest in Crete, reaching up to 2456 m.
Outstanding scenery and wonderful climate are embedded in the cultures of all the civilizations that lived there. Many antiquities can be found within the Geopark, such as the Minoan settlement of Zominthos , the cave of Idaion Andro, and the city of Eleftherna. Psiloritis UNESCO Global Geopark provides excellent opportunities for recreation and education. The visitor has an extensive choice of activities ranging from sports, geology, flora and fiona observation, and visits to archaeological sites.
Shepherds’ houses, called “mitata” are landmarks of Psiloritis Mountains. Totally waterproof and fully adapted to the landscape, they are still used for cheese production. Mitata are made using the dry stone building method by which structures are constructed from stones without any mortar binding them. The art of dry stone walling was inscribed in 2018 on the UNESCO Representative List of the Intangible Cultural Heritage of Humanity, by as France, Greece, Italy, Croatia, Switzerland and Spain.