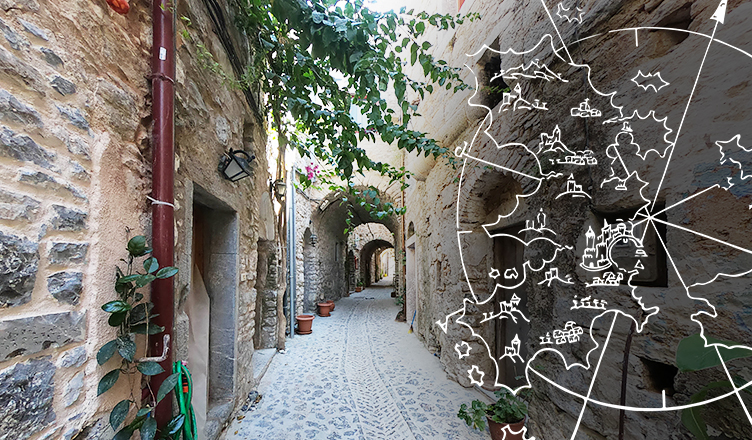 One of Mingei’s pilot studies involves mastic; a product from the mastic tree which exclusively grows in the south-west of Chios in Greece. The craft is highly localized, and the cultivation of mastic has historically shaped the local life. The 24 villages from where mastíha is harvested are known as Mastihochoria, or Mastic Villages – their name being an indication of the importance of mastic for the region. In order to explore and illustrate how the craft practice of mastic and its community have shaped the urban context, we created 3D reconstructions of the villages. How does the practice of crafts shape its surroundings and the local life?

The Island of Chios

The Island of Chios is situated opposite of the large natural bay of Smyrna, Asia Minor on the seaway from the exit of Dardanelles to the island of Rhodes or Alexandria. In 1571, the island passed from the Genoese under the rule of Ottoman domination. Both until 16th and the beginning of the 20th century, many visitors and navigators stayed on the island and passed down important texts and pictorial material over many generations. On the one hand, the rare product mastic, which can only be extracted from a common kind of a tree called “Skinos” on southern Chios. And on the other hand, the beauty and courtesy of women as well as their lavish costumes inspired foreign visitors to describe and represent the Island’s uniqueness.

At the beginning of the 15th century, Chios Island is mapped in “Liber Insularum Archipelagi” by Cr. Buondelmonti, which became a standard for the later maps of islands, such as those of B. Dalli Sonetti (1485) and B. Bordone (1547).

Nowadays, Chios is one of the largest islands in the Aegean Sea and is famous for the mild climate, the beautiful beaches and the variety of historical monuments. First and foremost, Chios has been well known throughout the world for the cultivation of mastic trees since ancient times. Mastic (μαστίχα) is a natural product collected from the bark of mastic trees, which exclusively flourish in the southern part of the island and due to this fact, the medieval settlements in that area are called “Mastichochoria”, as from mastic villages (χωριά).

The development of mastic villages

These settlements date back to the Byzantine Era and they are still Cultural Heritage monuments, although they have suffered disasters over the centuries. During the Genoese occupation (1346–1566), the mastic cultivation becomes progressively systematic and 22 mastic villages are founded in the southern part of the island aiming mainly at exploiting mastic, as a monopolistic product. Τhe geographical position of the villages was not visible from the sea and their layout reminds of a fortress, of which the aim was to protect the inhabitants from the frequent incursions in the Aegean Sea.

Latin architects, engineers and contractors oppressively had local farmers build the villages, according to the Italian architectural model of that era. In the center of each settlement, there was a tall rectangular tower, around of which there were houses very close to each other. The walls of the houses located circumferentially of the village formed an external wall with a cylindrical turret with crenellations on each corner to avoid invaders who tried to approach the center of the village by confusing them. This architectural draft gave masters the opportunity to close the gates in order for protection.

The houses of Mastic Villages follow the same architecture. They are stone-built, consisting of ground and first floor and are covered by semicircular domes called “Germata”. On the ground floor were stables and a storage room for agricultural products. On the first floor were the other rooms, which spread around a central outdoor space, the “Poundi”, which served to illuminate and ventilate the floor. The roofs of all the houses were about the same height, making it easy for residents to escape from the top of them in case of threat.

Τhe best preserved Mastic Villages are those that did not suffer major damage in the disastrous earthquake of 1881: Pyrgi, Mesta, Olympoi and less Vessa, Kalamoti and Elata.

To illustrate craft practice and community needs shaped the urban context we used aerial images of the Pyrgi, Mesta, Olympoi and Elata villages to show the densely-constructed houses which formed continuous external walls and the location of maximum security: the central tower in the village where mastic was stored and guarded during day and night. The 3D reconstructions of these villages are shown to illustrate and understand these architectural structures. It ought to be noted, that in later years, the towers in Mesta and Elata were replaced by churches. The location of the central tower for our four villages and the wall perimeter is shown. Can you find them in the 3D reconstructions?

Pyrgi is a rich village for its folklore, archaeological and linguistic importance. The village is surrounded by a medieval fence that is formed by the external walls of the houses. There were only two exits from the village, which used to be sealed with two iron gates. The roads are narrow and the two or three storey houses are tall. The name of the village comes from the tall tower around of which the rest settlement was built. The Byzantine temple of Holy Apostles, with the well-preserved frescoes inspired from the Old and the New Testament, is situated at the village square. The existence of this church proves that the village was not constructed by Genoese for the first time, but several nearby settlements merged with the existing village during the Genoese occupation.

In Pyrgi the façades of the buildings have been decorated in a different and unique way throughout Greece. More precisely, this technique is based on the black sand of the roughcast, which is painted with white color and then it is scratched diligently. In that way, a variety of black patterns can be created on a white background, such as triangles, circles, semicircles, or rhombus. This technique is called “Xysta” and many walls of houses and churches have been decorated in this manner, giving an outstanding impression to the village. At last Pyrgi is a village of folklore interest and the only one of several villages that maintains many customs and traditions till today.

Mesta is the most typical sample of fortification and the most well-preserved of the rest mastic villages, in the south of Chios. The village was built in a pentagonal form, which is perhaps unique in Greece, during the Byzantine Era, while later Genoases improved its fortification. Each house is built next to the other, without gaps but only two entrances to the interior of the village. The alleys are narrow and most of them are covered with arches, on which some residences are built. The layout of the village reminds of a labyrinth, aiming at preventing pirates from easily approaching the center of it.

The oldest monument of Mesta is the church of Old Taxiarches. It is a single-aisled Basilica, built during the Byzantine period. In the interior of which there are traces of frescoes, although most have been destroyed. The largest church in the village is the newest church of Taxiarches, built in 1868 on the site of the old circular castle tower. Next to it, there is the central, traditional village square with taverns and cafes. Nowadays, Mesta is a major attraction for many tourists, both for its unique architecture and the natural beauty of the area. The main occupation of the inhabitants is agriculture.

Olympoi Village lies in a small, treeless valley far from the sea. It is a medieval village of the 14th century and has been declared a listed monument. The village maintains the form of the medieval “castle-village” quite well, enclosed by the exterior walls of the houses, which joined together. Those residences had no doors or windows, so as to deter their owners from seeing the outside of the village. The stone-paved streets of the village are narrow and lead to the main square. The functional character of the houses supports the village’s defense against pirate raids. The church of St. Paraskevi with its wood-carved iconostasis and the Trapeza of Olympoi, a two-storey building with long hallways preserved in a good condition since the Middle Ages, are of noteworthy interest. Just outside the village, near the beach of St. Dinami with the homonymous church, there is a cavern with remarkable natural decoration of stalactites. It was first visited in 2000.

Elata Village is located in a semi-mountain area, on a rocky hill in the southern part of the village where three windmills were built and are preserved to date. The position of the village is away from the sea, although there is a clear view of the Aegean Sea. The position and the architecture of Elata illustrate the dread of the inhabitants due to the frequent raids of the pirates from the Middle Ages till the Turkish Occupation. The “village-castle” architecture of Elata is still preserved to a certain extent. Seven older Byzantine settlements united to build the castle of Elata, probably around 1300 AD. At that time, the inhabitants of the village were engaged in the farming of a wild bird called partridge, which is not the case nowadays. The name of the village is thought to come from the Greek phrase “elate, elate” (=come, come) which was shouted at the inhabitants of the surrounding settlements to enter the castle when they were informed about the arrival of pirate ships.

To sum up, Chios island is a destination that invites visitors to discover it. Apart from beautiful beaches with clear waters, Chios stands out for the medieval villages in the southern part of the island, which are famous throughout the world for the production of mastic. This natural product is cultivated entirely by hand and is nowadays used in medicine, pharmacy, dentistry and cosmetics. Mastic villages also display exquisite architecture and unique decorative elements on the facades of the houses, offering visitors the opportunity to travel back in time.

Want to learn more about the mastic villages? Go visit The Chios Mastic Museum! The museum is situated in the wider area of Pyrgi Village and aims at presenting the history of mastic cultivation and the processing of its resin, which integrates into the cultural landscape of Chios. The permanent exhibition of the museum lies emphasis on the mastic as a unique natural product. The first module presents the traditional know-how of mastic cultivation. The second module focuses on how managing the cultivation and its produce shaped the agricultural landscape and the settlements of southern Chios and the Mastic Villages historically. The third module is dedicated to mastic resin’s cooperative exploitation and processing in modern times, which marks an important chapter in the productive history of Chios. The museum guidance is completed with an outdoor experience, since the public comes into contact with the mastic trees and the natural habitat, where they prosper.

Written by Argyro, Polykarpos and Xenophon from FORTH, photography and video by Thodoris Evdaimon (FORTH)