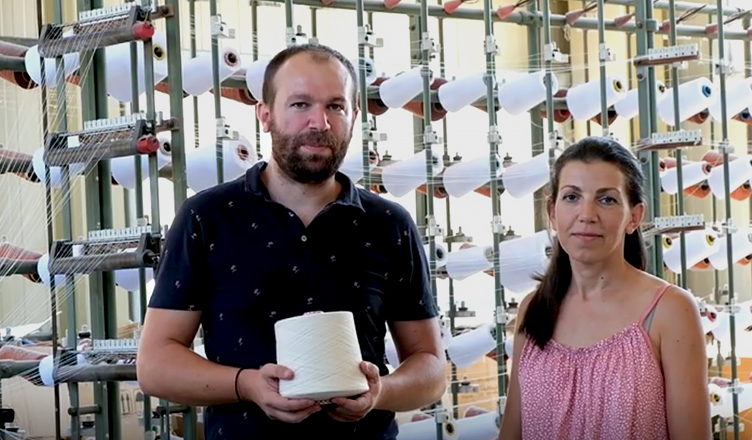 The weaving workshop of Crete, CRETACOM located in the Handicraft park of Anopolis is a family business, which dates back to ’80s. In the past, the main product of the workshop was the Cretan handmade weaving textile, which was then in its heyday. Nowadays, among others, kitchen towels, Hamman towels, and tablecloths in different patterns and colors are produced, connecting tradition with the needs of modern societies.

History of the business

The daughter of the family, Katerina Giannadaki, practically grew up in the midst of the weaving workshop. When she finished her studies she felt like this was her natural inclination, so she decided in agreement with her brother, Giorgos Giannadakis, to be practically involved in the workshop and develop it as much as they could. They took over the business and since times had changed over the years, they were called to study the market requirements and needs, hence what is in high demand, and what is more commercial.

The product that played a significant role at that time and to this day was the kitchen towel in different designs and patterns, which is called “Potiropano” in Greek. Αpart from the kitchen towel, considered the main product, they started to produce tablecloths in a more modern design and with more colors. For the past 4-5 years, the beach towel, as known as the Hammam towel, has been on the market, known to many as a ‘Turkish towel’ called peştemal, which is a bit wrong, because those who know about the Cretan weaving art, are well aware of the fact that there have always been towels like this in the Cretan houses. Thus, they seized this opportunity and started the production of the Cretan towel in modern colors and patterns, a necessary accessory for anyone on the beach.

Due to the fact that the products are Greek, meaning that they are more expensive than others, they tried to maintain their quality in order to be competitive in the market. In an effort to disseminate their products, they also participated in exhibitions in Athens, landing clients throughout Greece and abroad.

Development of the business

Things have changed considerably since they relocated the business to the Handicraft park of Anopolis. By following the innovative technology they are better equipped then they used to be and they are able to supply embroidery machines that did even not exist in the business they inherited from their parents.

Through this purchase, they are now able to do all the embroidery themselves rather than outsource it like they use to do in the past. The business currently has 3 machines that produce kitchen towels; the daily production is at 500 to 600 pieces in 8 hours, depending on the day and the possible damages they may be faced with. Additionally, they manufacture Hamman towels, which daily production is around 200 towels now. At last, a machine produces about 50 to 80 meters of tablecloths per day depending on the design.

Therefore, the factory plant is slowly diversifying; the raw materials are only threads, they create the fabric, and are involved in the process of cutting, sewing, packaging and selling it. To recapitulate, Katerina and Giorgos succeeded to preserve a traditional job, which mainly flourished in the past, by adjusting it to the needs and requirements of modern societies, intertwining tradition with fashion.

Written by Argyro Petraki (FORTH), photography and video by Nikitas Michalakis (FORTH)