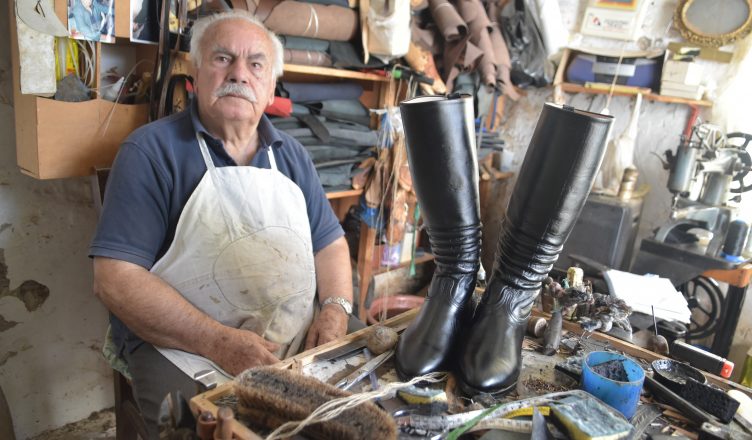 The team of Mingei project visited the mountainous village Anogeia, located at the foot of Psiloritis Mountain on Crete Island, in order to meet a shoemaker called Nikolaos Fasoulas. Nikolaos Fasoulas has been involved in the construction of handmade traditional boots since 1949 until today, at the age of 91 years old. He has been mainly occupied with the creation of traditional, handmade, leather boots known as “Stivania” in the Cretan dialect. That was the first one on Crete, who constructed boots with only one seam, called in Greek “Monokommato”, which means seamless.

The name “Stivania” possibly comes from the Italian word “Stivale” that means boot, something that may be true, as the island was for many years under the Venetian occupation. Stivania are one of the most typical parts of the traditional Cretan costume and a Cretan man’s main pair of shoes, who used to wear them not only in agricultural activities, but also in formal occasions. They are made on the leg of the “client”, as the shoemaker takes measures for each one, so they are tailor made exactly to any peculiarities of the foot. Specifically, they are sewed by hand and at least two days are required for them to be constructed.

There are two different kinds of boots, which are differently constructed depending on the situation in which they are to be worn. First, the shepherds’ boots are called “Vaketa” because they are made of calfskin. These boots have toughened soles and are made οf hard, real leather and rubber so that they are suitable to be worn by shepherds on the mountain of Psiloritis and to protect them against soil irregularities and weather conditions. To exemplify, the shepherds of the area graze their flocks of sheep on the mountain Psiloritis, where intense weather conditions dominate and therefore they have to protect their feet from the rain and snow.

Another category of boots, are those that are suitable for formal occasions, such as weddings and traditional festivals or for everyday life activities. These boots are also made of real leather but they have thinner soles and often do they carry a perforated pattern. Additionally, they are offered in three different colours; black, white, and brown, although the most common of these is black.

In the past, one of the most widespread professions was that of the shoemaker, which was practiced for many years in the form of a cottage industry. Nowadays, unfortunately, this traditional job tends to disappear, as the demand of handmade boots has decreased significantly. There are several factors, which contribute to this phenomenon, the most important of which is the incredibly rapid development of technology. Specifically, in modern technologically developed societies, machinery has replaced labor and manufactured products. Due to the low production cost and the mass availability in the markets, standard products are more competitive than handmade ones, the manufacturing of which requires more time, effort and money. However, in cases where their construction continues, both the knowledge and the taste of the past have been preserved, conveying them to the next generation and promising that these handmade boots will last a lifetime!

Written by Argyro Petraki (FORTH), photography and video by Nikitas Michalakis (FORTH)