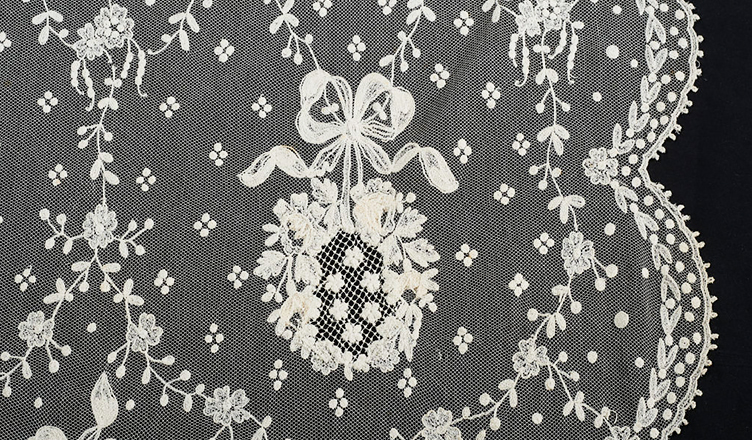 Limerick Lace is an active community of local lace makers, the Limerick Museum and Archives and local educational institutions in Ireland. The community is an intriguing example of how traditional crafts are kept alive and relevant. Waag’s Dick van Dijk  spoke to Gabriela Avram, lace making enthusiast and lecturer in Digital Media and Interaction Design in the Department of Computer Science and Information Systems of the university of Limerick. What can we learn from the Limerick Lace project?

Limerick lace is a hybrid lace made on a machine made net base. It is a ‘mixed lace’ rather than a ‘true lace’, which would be entirely hand made. Though Ireland has around 7 or 8 types of lace, Limerick lace is the most famous of all Irish laces. It has been worn by thousands of women, including Queen Victoria, American First Lady Edith Roosevelt and Countess Markievicz.

Limerick lace comes in two forms:
• tambour lace, that is made by stretching a net over a frame like a tambourine and drawing threads through it with a hook;
• needlerun lace, which is made by using a needle to embroider on a net background.

As the holes of the net (called gaskets) on which you create the pattern are very small, making lace is not only about carefully looking, but it relies on muscle mind and practice as well. There are 47 distinct stitches in Limerick Lace. The first steps of lace making are explained here.

The recent revival of lace making started in 2014 when Limerick was cultural capital of Ireland and several ‘Made in Limerick’ projects were funded by the Irish government, Limerick Lace being one of them. Its main objectives were to design and create an exhibition of Limerick Lace for the Limerick Museum, and to produce a book on the history of Limerick Lace.

The Limerick Museum and Archives host a valuable collection of local lace, partly ecclesiastic, partly domestic (dollies, aprons, christening robes). But before 2014, there were only two cabinets in the museum displaying lace.

One of the locals who got involved in the Limerick Lace project is Gabriela Avram. She joined the project out of personal interest in civic engagement and the potential link with modern technologies, such as augmenting lace with digital technology and creating digital tools to support lace makers.

Gabriela Avram was commissioned to build an interactive installation for the 2014 exhibition, Amazing Lace. Together with interaction design master student Suzanna Melinn and the local community they co-designed the installation Enlaced, consisting of an artificial leather laser cut front dress on a mannequin, augmented with lace pieces contributed by various local community members mounted on the sleeves, including NFC tags allowing the visitors to identify each maker.

Additionally, the exhibition presented instructions for visitors on how to make lace and try lace making out themselves. Later on, a Limerick Lace starter kit was constructed and made available through Etsy. It is hard for novices to get access to the materials needed, so the kit is an important step in making the craft more accessible.

In the years that followed, the activities to revive the lace community continued. The Limerick Lace project encouraged locals to bring out their own lace pieces to show and discuss, in a series of events titled Bring Out Your Lace. In the local Fablab, several local artists and makers started experimenting with lace making through other means than textiles, such as paper, 3D printers and laser cutters.

In 2016, Limerick Museum and Archives, in collaboration with the Limerick School of Art and Design organised a festival titled Hybrid: the identity of liminal lace, addressing the role of lace and its social-economic history. The festival included several exhibitions and lace-making workshops, as well as a conference.

The Florence Vere O’Brien lace drawing competition, initiated in 2015, invited art students to come up with new designs for Limerick lace, and the submissions went beyond any expectations, encouraging a potential move away from the dominant, traditional motives of flowers towards streetscapes and everyday objects.

A local group of lace enthusiasts formed in 2017 and became known as the Friends of Lace. They became more structurally involved to help to conserve and preserve artefacts, for example by repacking the lace in storage at the Museum following strict conservation rules, catalogue lace items, create teaching resources and support novel interpretations and uses of Limerick lace.
The revival made them visible as an active community group, which led to other groups following their example. In July 2019, Limerick lace was added to the National Inventory of Intangible Heritage.

Gabriela sees her role as attempting to bridge a gap between a valued traditional craft, and the opportunities offered by modern digital technologies for its preservation, documentation, further development and outreach.

One of Gabriela’s findings in liaising with art students is that new audiences lack dexterity, they don’t know how to use the needle – as they are mostly used to keyboard and mouse. In learning the craft trying things out is necessary, including the nuisance of undoing what you have already created, and starting over.

By now, the community’s activities also target tourism, through information leaflets in hotels, workshops for tourists, which especially receive high interest from American tourists. Apart from their own website and social media channels, the Friends of Lace are working towards an all Irish laces website, dreaming of a Limerick lace study centre (modelled after the one in Sydney) and potentially a free online lace images repository, created and edited by volunteers around the world.

Gabriela Avram is Lecturer in Digital Media and Interaction Design in the Department of Computer Science and Information Systems of the University of Limerick, Ireland, and a senior member of the Interaction Design Centre. Her current research focuses on sustainable urban development, collaborative economy and the role of technology in supporting civic engagement of local communities.

All information in this article comes from Gabriela Avram and the website of Friends of Lace.

All photos are used with consent, and taken as part of a project funded by the Department of Heritage, Culture and the Gaeltacht through their Co-operation with Northern Ireland Funding Scheme 2019. The North-South collaboration project brought together the Hunt Museum, the Limerick-based Friends of Lace group, and the South Armagh Lace Collective. The full gallery of photos is available here.