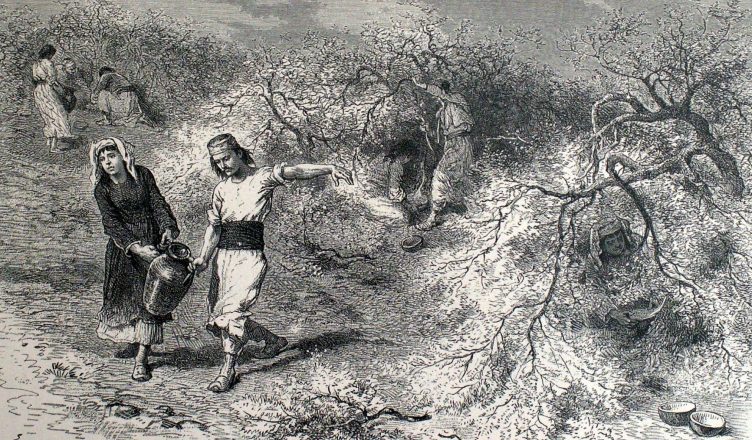 In this third part of the series about a year in a mastic village, we’ll follow the journey of little Dimitris and his family. Together with Dimitris, we are observing and learning about the craft of mastic cultivation. Stay tuned for more!

‘Grandma, were you only singing at the fields while embroidering?’, Irini asked her the other day. ‘No, honey. Collecting the mastic was a joyful period too, which took place from September until mid-October, when hunting season began. You know, children, we were spreading white sheets near the mastic trees that we were working on. This way the hunters would notice that people were there, so they would not shoot’, Grandma said while smiling. ‘What were they hunting?’, Dimitris asked. ‘Rabbits and grouses, which were all around us!’, Grandma said enthusiastically.

Irini started wondering about their safety in the fields, and asked Grandma, ‘So, you women were alone in the fields with hunters strolling around? Wasn’t it dangerous?’ Irini didn’t realise that Grandma grew up in a different period of time when people usually felt safer. ‘Dangerous? No, dear’, grandma replied. ‘Quite the opposite. Imagine, the collecting season was also a courting season for the villagers. The unmarried women went into the fields, accompanied by their mothers and sisters, so the men had the opportunity to see them outside of the village and court them. Young men were leaving small pieces of paper under the rocks so that the young girls would find them while collecting mastic.’ ‘And what if the mother collected the love note instead of the daughter?’, Irini wondered. ‘If the mother did not approve the sender, she would go to his mother and complain. Good old times, my child’, Grandma said and moved her arm in a circular pattern*.

‘And what songs did you sing while collecting the mastic?’, Irini continued. Grandma paused for a moment and then said, ‘Well, this is one that a few older women of my age might remember. The younger women do not know it.’

Όσοι κι αν τον εκούσαν (By any who heard it.)

Νάτος σαν τον απάνω (Here it is like the above)

Μον’ήθελα να παρακαλώ (But I only wanted to beg)

Όταν σε πρωτοείδανε (When you were first seen)

Τα μάτια τα δικά μου (By my own eyes)

Και μπήκες στην καρδιά μου (And you entered my heart.)

‘Isn’t it a bit dark, Grandma? Why did she want to die? And what does death have to do with collecting mastic?’ Irini asked upset. ‘My child, don’t ask for interpretations. A song has different meanings for each person. It speaks about death, but also about love’, Grandma said to soothe her, and continued with a rather sad and tired tone in her voice, ‘Working with mastic is a very hard job, children. All year long you are either in the field working with the tree, and believe me, manipulating another living being is not an easy job, or at the house working with its product. After collecting the mastic, you know that the process of cleaning will start soon; another meticulous hand work. That’s why it is very difficult to automate mastic cultivation tasks. At the Association they have built machines to do some of the tasks, like a machine for separating mastic pieces according to their size. Nevertheless, pinching still needs to be done by hand. No machine can perform that task’.

Irini and Dimitris were skeptical for a moment due to the song and Grandma’s comments but the truth is, little Dimitris was more preoccupied with the custom of leaving love notes under the trees. For a little boy, he really seemed to like old-fashioned ways of living. Two weeks before, at the celebration of the Dormition of Virgin Mary, he was not able to find Eleni, the girl that he likes, but now the collecting period begins and he might see her in the fields. And maybe he’ll also leave her a note?

* This is a common way to express that a lot of time has gone by non-verbally in Greece.

This is a fictional story written by Danae Kaplanidi (PIOP), and is the outcome of archival and ethnographic fieldwork research in the villages of Mesta, Olimpi, Emporios and Pyrgi. The author would like to thank the research participants for their time and willingness to share stories about life in southern Chios.

In the Spotlight: The Artist Ioannis Stathoyiannis

The team of Mingei Project visited the solo exhibition of [...]

During the RISE IMET conference on emerging [...]