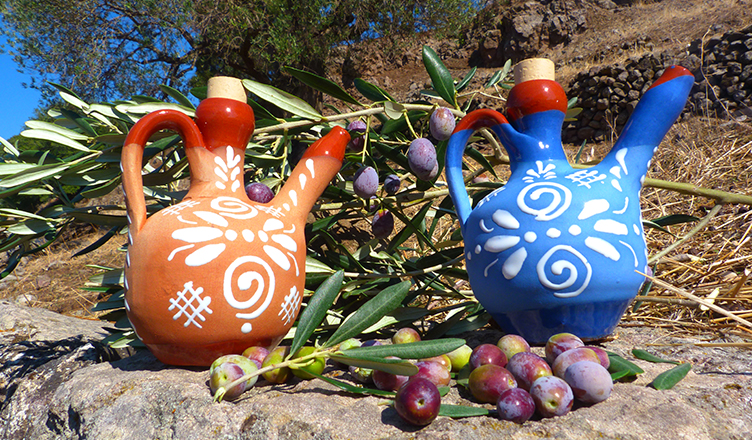 The ceramic tradition on Lesvos island has a long history of 5.000 years, as the potter findings reveal in the prehistoric settlement of Loutropoli Thermi. Ceramic art is the most ancient form of art that only combines the four principle elements of nature, dirt, water, air and fire. It is about a difficult and time-consuming job that requires knowledge and technique through all the steps; choosing the right clay, cleaning and kneading, drying, decorating the surface and baking. These steps are explained in our previous article. Now, we will look into the specific trade of the Traditional Handmade Ceramics Workshop of Stelios Stamatis.

Stelios Stamatis is located in Mantamado Village on Lesvos Island, Greece. There, visitors will find elaborate items of pottery in a great abundance, hand painted and made of soil, water and fire. These items can be used as houseware cooking utensils and their designs can be inspired from local, older kitchen utensils reviving history. There is also the possibility for clients to decorate their living space with ceramic objects, according to their tastes and needs combining traditional with modern style.

Stelios Stamatis loves tradition and is thus striving to keep it alive. Many pottery items are closely related to the traditions and the customs of the island Lesvos, while they were used in many everyday activities. They are not just objects of pottery, but carriers of intangible heritage and cultural traditions. Some indicative examples of Stelios’ work are shown below. 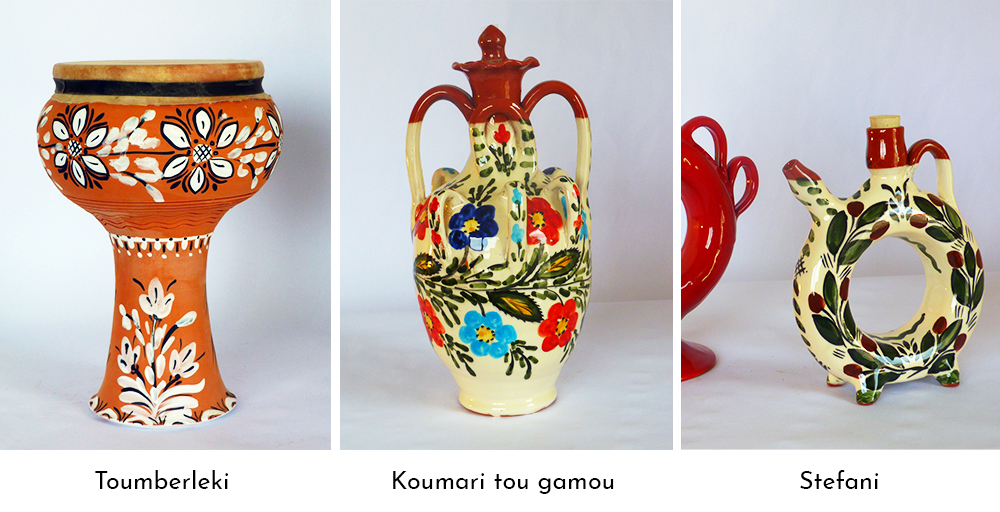 A toumberleki is a traditional drum that is played with the fingers of both hands. One end is opened and the other is covered with leather. Apart from the impressive toumberleki, traditional pitchers called koumaria can be created at the workshop, that are suitable not only for storage of liquids but also for keeping the water cool.

This jug full of water was carried into the church by two children, a boy and a girl with both their parents still alive, while the bride was walking in for the ceremony. They would place it, full of water under the Gospel, where it would remain throughout the ceremony to remind of the miracle in Kana, where God turned water into wine. After the end of the wedding, the couple had to take it home and drink from it for 40 days. The large handle symbolized the groom and the bride, the small one the babies that were to come, and the horseshoe was for good luck.

The wreath got its name from its shape. They used to fill it with ouzo, cognac or raki and offer it to the horsemen when they returned from the festivals and especially the festival of St. Charalambos. Βecause of its shape it was useful, since one of the horsemen would take it, raise it, wish the housewife well and drink it. He would then pass it on the next one until the whole group drank and wished her well. 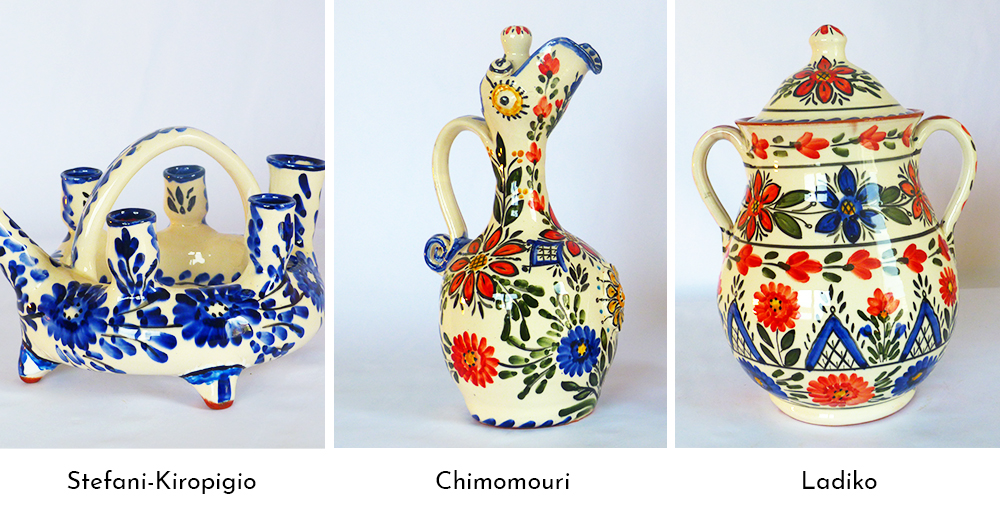 The wreath-candlestick was filled with ouzo and placed on the wedding table. The candlesticks symbolized the parents, the two ends represent the couple, while its circular shape represents the circle of life. They would have a young child serve the newlyweds and the in-laws. If the ouzo would finish, and not all glasses were full, then the couple would not have children. If the ouzo finished while serving the last glass, they would have a girl and if there was ouzo leftover then they would have a boy.

Chimomouri is a vessel that was used during christening events. When a baptism was held, they used to carry the hot water from the houses. The material of which the pottery items were made was suitable for retaining the temperature of the water.

Ladiko is a vessel mainly used to serve olive oil.  It was placed near the table and was used during the meal.

Stelios Stamatis was born in Mantamados on Lesvos Island, and is the descendant of a generation of clay potters. Pottery is a craft that is slowly vanishing. From genealogical records, we know that his great-grandfathers were born before the 1880’s, and they were likewise clay potters, as were his grandfather and father.

The trade of pottery was passed down from generation to generation, eventually to the hands of Stelios. He was metaphorically born in the kiln of his father, Efstratios Stamatis (1915-1975). Even before he reached the age of a school boy, he was trusted with the chores of carrying water, branches and soil. At the early of age 10, he was taught the primitive method of using the foot-operated clay wheel. During those difficult times, he was forced to help in the shop with his father, resulting in him leaving school after the end of Primary School. Stelios and his father diligently worked on making the traditional clay pitchers, crock pots, that his mother finalized with the traditional process of lime and hand painting.

His father passed away in 1975 and in 1980, Stelios took over the family business. In 1978, he bought an electrical kiln and other updated tools to help him produce bottled clay pottery. He is currently a professional clay potter and ceramic maker, creating household items including cups, plates, pitchers and pots. He continues to make traditional items that his wife and daughter finalize and hand paint.

Written by Argyro Petraki (FORTH).