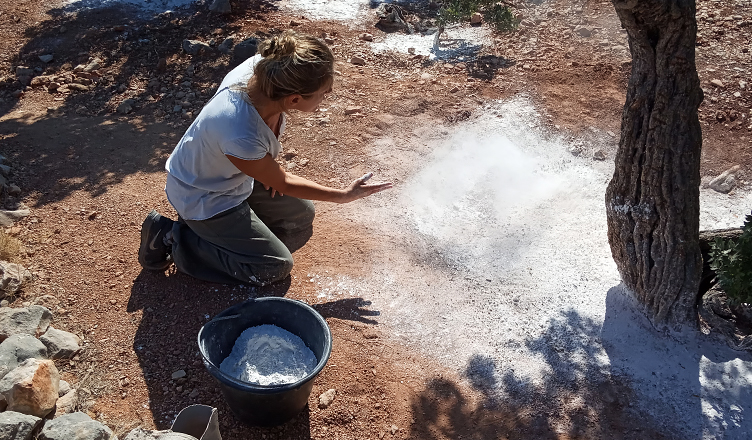 Within the Mingei project, we collect the narratives of individual craftsmen and -women describing how they work. Besides those narratives, it is important to collect general descriptions of the craft processes that are used in each of our three pilots on glass, mastic and silk weaving. This is important because they complement the individual, particular knowledge and experience of craftspeople. How do we create these general descriptions?

From crafts to process scheme

On the other hand, crafts are performed by humans and characterized by unforeseen events or situations, and each crafter has its own way of dealing with it. There are formal languages for detailing behavior up to any level of detail. These languages are mainly in robotics. However, these languages are not needed for Mingei. The purpose of Mingei is not to instruct a robot to be a crafter, but rather to transmit crafting knowledge to humans.

In order to transfer the crafting knowledge onto – for example – museum visitors, it suffices to use a language that allows us to outline the general steps of the process. Based on these outlines, we then tackle the difficulties and peculiarities of the crafting process by linking to additional information. This can be videos showing how a master does it, texts describing the step in natural language, images of the tools, and so on.

The activity diagram of mastic

Following a consolidated practice, we have adopted a de facto standard, namely Activity Diagrams of the Unified Modelling Language, also known as UML. The following picture shows the activity diagram that describes the cultivation of mastic, which is one of Mingei’s pilot crafts. 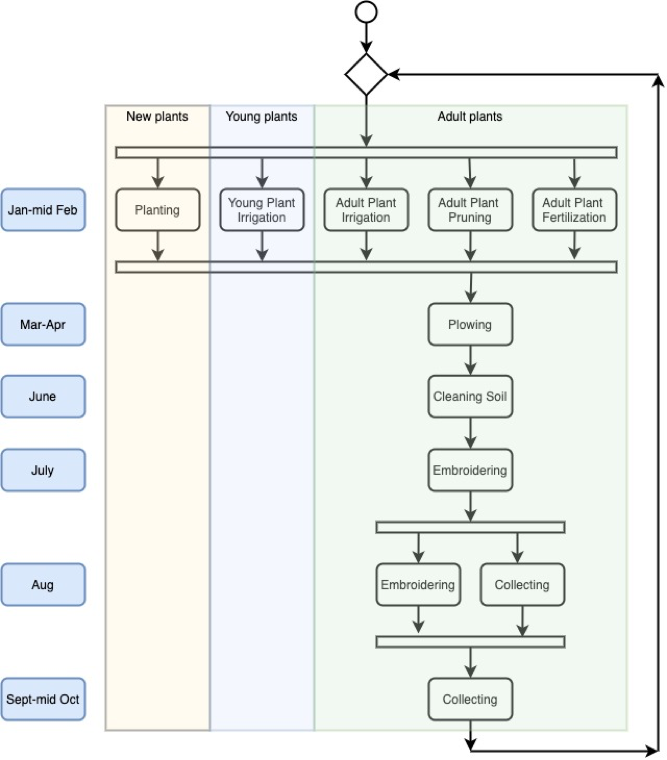 The diagram has three vertical “swim lanes” in different colors: each swim lane corresponds to a kind of plant and shows the activities that concern that kind. On the left side of the diagram, the time periods illustrate when the different phases of mastic cultivation take place.

The diagram has a beginning node (the circle on top) but no ending node, since the cultivation of mastic is a cyclic activity that repeats the same every year and, at least in principle, never ends.

During January and the first half of February, cultivators are busy planting new plants, irrigating young plants and irrigating, pruning and fertilizing adult plants. All these activities are performed in parallel, as the diagram shows by enclosing them between horizontal synchronization bars.

No other activity is carried out on new and young plant for the rest of the year. In contrast, adult plants require a lot of attention from March to mid-October:

The diagram has a graphical notation, which allows humans to understand the process, i.e. the steps that make it up and their relationships. Diagrams like this are developed by the technical partners after collecting knowledge from the cultivators and then they are shared with the cultivators in order to be validated by them. However, a computer cannot derive this information by “looking” at the diagram. After validation, they are transformed into symbolic expressions where steps and relationships are explicitly represented, using the Mingei ontology and inserted into the Mingei knowledge base. Afterwards, it can be displayed upon request and is preserved for future re-use.