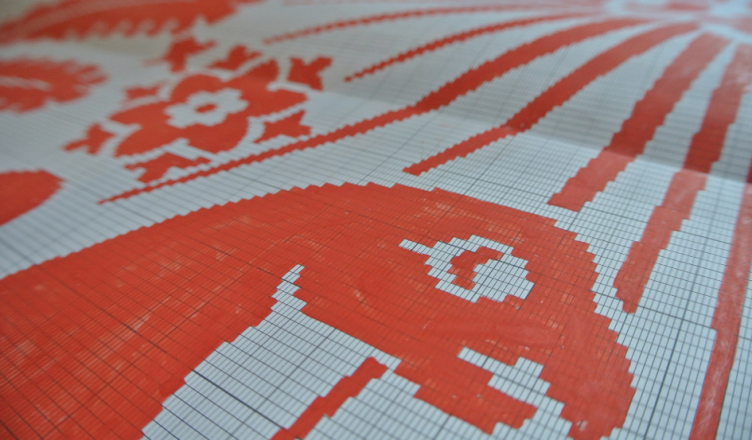 An almost forgotten vocation in the textile sector is that of the point paper designer who, like the pattern designer, also has to complete a 3,5-year apprenticeship, for example at the Applied Art College or the Textile Engineering College. He or she was responsible for the design getting into the fabric, transferring the work of the pattern designer into a type of technical drawing for fabric, mostly Jacquard fabric. That meant that each individual warp thread on the loom had to be raised or lowered individually as dictated by the pattern punched into the cards and taking into account many other factors.

First the pattern was transferred to cartridge paper which is similar to millimetre paper but much coarser, the vertical lines representing the warp and the horizontal lines the weft. The size, shape and number of boxes on the paper were calculated according to the relationship of weft threads per centimetre to warp threads per centimetre. One box on the cartridge paper corresponded to one warp or weft point in the fabric either as part of the design or of the background weave. The craft practitioner transformed the design into a graphic representation using brush and paint, a task which required both graphic and creative skills and technical understanding. At the outset the point paper designer needed to be familiar with the end product – the material it would be made of, what treatment this material had already been subjected to and how it is to be tailored.

The point paper designer needed to have a very wide basic knowledge from the technical details of the looms and machines, to the theory of fibres, theory of finishing and design, stylistics, topography, theory of weaves, theory of pattern repeat (i.e. the smallest unit of repeat of a pattern). The choice of weave determines the character of the design and it can improve it and accentuate the quality of the finished product. It is up to the point paper designer to make this choice based on past experience.

There are three basic weaves – basket weave, twill weave and satin weave – but over time point paper designers have developed numerous others which they keep in a sort of catalogue. And last but not least the quality and price requirements of the customer need to be considered. Each fabric requires a different point paper design. A delicate necktie fabric has completely different requirements to high quality damask bedding. At the same time it is important for the point paper designer to know whether both sides of the fabric will be visible at any one time. In the case of a lady’s scarf they would- i.e. both sides need to be attractive – in the case of a necktie the reverse side is concealed with lining material.

The point paper design also controls the insertion of the weft thread into the loom and the craft practitioner decides at which point in the fabric one or several colours appear. Once this has been completed, the finished point paper design is passed on to the card puncher, a male vocation in the textile sector as it required a certain amount of strength.  The card puncher then punched the design and the processing information into cards which when laced together to form continuous pattern sets controlled the Jacquard looms.

To transfer the information he needed to read the data contained in the point paper design. This was a complicated task and it was a source of errors. Optically legible colours were therefore introduced for point paper designing.  The design was then mounted on a drum-shaped reading device which could scan the point paper design dot for dot and line for line, the scanned data being transferred to cards using a type of keyboard.  Each punched card produced in this way contained the information for one weft thread shed. A hole in the card signified “warp raised”, i.e. the warp thread is visible in the fabric.

The vocation was officially recognised until 1978 as was the vocation of point paper designer. Since then everything has been done by computer and the craft practitioners have new designations: the point paper designer is “Product Designer Textile” and he uses a scanner, digitalising tablet, plotter pen and point paper design software for his work. The card puncher is now a “Pattern Programmer Weaving”. Initially of course computer technology also used punched cards to transfer data in a similar way but the connections between the two…. That is another story!